This is the story about a boy named Danny who had his best friend, Nicky, a Golden Retriever, grow old and die. Yes, as all dog owners know the loss of a pet is one of the saddest things to happen in life. In many ways, Danny was saddened and simply overwhelmed with his thinking about Nicky, wondering as the book title suggests, Where Did Nicky Go?

Author Lucy Geddes has written a very lovely and important story which all children living with a dog, or even another loved pet, will benefit from the experience Danny went through. She teaches a lesson of kindness and hope, along with allowing the time for Danny to come to grips with the loss of his best friend. Illustrations by Schenker De Leon adds the perfect visual layer of the messaging for this story allowing readers to see Danny and how the loss of Nicky played upon his emotions. Together, this is a somber story, yet realistic about the lesson of having to put thoughts in the past – even seeing how hard it was for Danny to understand.

All hope isn’t lost, as Danny is asked to temporarily take care of a friend’s puppy named Toby while that puppy’s family is out of town, and Danny agrees. As Danny reads his sci-fi book, Toby gets into trouble, and actually eats some chocolate out of Danny’s jeans pocket, then goes downstairs and turns over the garbage in the kitchen and makes a mess. Danny is told by his parents that Toby is only a puppy and needs to be watched more closely. Then something special happens.

Danny is at the beach with his Mom and sees a pattern in the clouds of a dog and a smaller dog. Danny believes this was a message from Nicky to Danny that he is alright, and as the clouds dissipate their image, Danny is comforted in knowing Nicky is in dog heaven. The story ends with a real-life photograph of the family with their smiling Nicky, and as the book closes, readers will feel the healing process of getting over the loss of a loved dog in their lives; a very important message to all dog owners.

Lucy Geddes has written a valuable theme in a very gentle and loving book for young children to learn from in Where Did Nicky Go? She answers the book title’s question with providing comfort and hope. This is a very important book for all families with a dog because someday, every child will feel the same emotions that Danny went through, and ultimately know their pet moved on to a good place. Highly recommend for any age, even if no loss, separation, or major change in their life has occurred.

The US Review Of Books 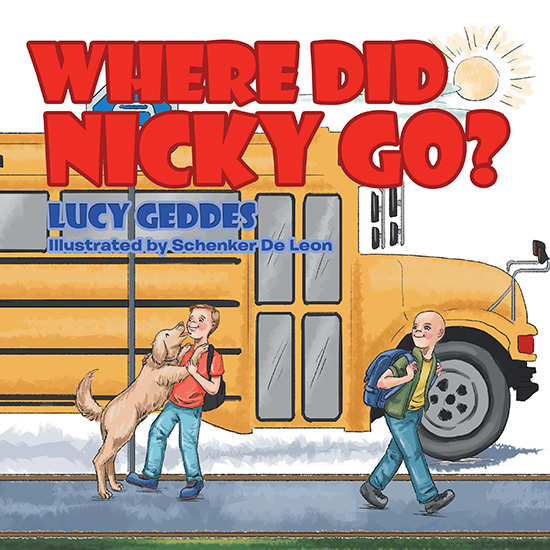 “Why didn’t Nicky get better like he usually did?”

This story confronts the death of a pet. The main character, Danny, loses his beloved dog, Nicky. The author gently writes exactly what needs to be said, helping parents guide their children through it, and helping rally any child facing that situation. In Danny’s case, his dog dies right before the summer break, so he has plenty of time to feel the hole in his normal summer vacation. But then his friend asks him to dog sit his puppy. Danny stumbles, not wanting to replace one dog with another so fast. When he realizes that he needs to step up and help his friend by agreeing to keep the dog, he still struggles to rebound enough to give the puppy the attention he needs and deserves. In this story, Danny’s parents guide and encourage him, rather than mandate his responses and decide for Danny when he is ready to recover from his grief.

Although the subject is depressing, it is true that adults sometimes find themselves fighting to maintain their child’s rainbows amidst thunderclouds. This book helps parents wade the waters of childhood disappointment. No one can protect their children from loss, but their loved ones can learn to help them with resilience. The book is best for parents and children to read together because It touches on religious beliefs and Heaven. Danny’s mother says, “I believe Nicky’s happy too. God wants us all to be happy.” The illustrations are precious. Sad Danny, lying on his bed with his red cheeks, is both adorable and sympathy-provoking. In fact, all of the facial expressions make these illustrations special and exemplary. While probably children from kindergarten through fifth grade and their parents who are going through the loss of a pet will appreciate this book the most, it is truly touching for anyone.

Sometimes there are reasons Grandma has to say “no,” such as in matters of safety. Other times, when the initial answer is “no,” Grammy then reconsiders. “Why not?” she thinks to herself. No harm will be done, and it might even be fun. In this delightful children’s picture book, that’s precisely what happens in a series of events, including the creative culinary decision to embellish a basic peanut butter sandwich with such outlandish ingredients as olives and raisins. The little boy and girl laugh, realizing it is quite delicious as they eat with Grammy.

Playing outside in the rain at first elicits a “no” from Grammy, but after her thinking, “Why not?” the three again enjoy silly fun. And when the children want to paint the swing set six different colors, Grammy says “no,” but then reconsiders, declaring, “This is going to look so pretty.” However, Grammy is quite firm in her “no” when it comes to the children going swimming without her, explaining they must never swim without an adult present. And so the three enjoy the pool together.

Geddes’ fun and brightly illustrated book is a fantastic selection to read with any group of small children. One can imagine the kids saying together in chorus, “Grammy says, ‘No!'” The important lesson imparted is that while sometimes it is okay to do silly things—with the permission of a parent or grandparent—there are other times when the answer must be “no.” These would include any situations involving their safety, health, and wellbeing. But no doubt about it, Grammy finds creative and slightly unusual ways to have fun with her grandbabies. Featured at the book’s end is a photograph of Geddes with the motley-colored swing set her real-life grandchildren painted, for which they developed the decorative color scheme.

“No means No,” but not all of the time. “No” can be “Why Not?” This is the lesson learned in author Lucy Geddes’ book Grammy Said, “No!”

“No” to painting the backyard play structure 6 different colors, “No” to playing outside in the rain, “No” to putting pickles, cheese, pretzels and olives on a peanut butter and jelly sandwich – all turn into a “Why not?” within the beautifully illustrated pages of this fun children’s book. As it turns out, playing in the rain is fun, and those sandwiches tasted good. But most impressively – the colorful painting of the play structure is revealed at the end of the book to have really happened – so it can be said that part of this book, at least, is based on a true story.

There are some rules which “No” means “No” – at least until some safety precautions are taken. For example: “No” to a bike ramp until knee pads and a helmet are put on; “No” to climbing tall trees when shorter apple trees can be climbed while gathering fruit; and “No” to going swimming, that is unless an adult is with you. So, in essence, children will learn the degrees of “No.”

The illustration-laden book tells the story with the short text interwoven to guide the many lessons. The artist, Schenker De Leon did a marvelous job showcasing the eyes of the characters, bringing out the emotions from that of a stern warning, to happiness and fun depending on what the situations called for.

This book is a wonderful way to bring to children the discipline of paying attention to the “No” of an adult. It can mean not at all, like never; or not yet, as in let’s do something to play it safe. These qualifications of the word “No” need to be explained providing the reasoning and caution children expect from their elders. In fact, a Grammy is always supposed to say yes, but this book explains the reasons why this Grammy is a “No!” for good reason.

Grammy Said, “No!” is because Grammy loves you.